Horse Trainer Memes, The new way to showcase your ignorance

Facebook has been an interesting evolution in horse knowledge. There are quite a few good groups out there and some that just make you scratch your head. When you read a lot of the horse groups you almost shiver in horror at the questions being asked, the methods being defended and the overall ignorance of a lot of the horse owning public. And then there are people that take it to the next level and decide to use their own little hate groups to go after someone that has corrected their erroneous ways of thinking. One such group is
Horse Trainer Memes You'll have to log in to facebook to see it. It starts off all funny and cute but quickly becomes apparent that it's also going to be used as a forum for personally attacking people. Well hell, if that's okay let's get it on!

The owner of the group is Justin Mundt. Justin is now a meme. 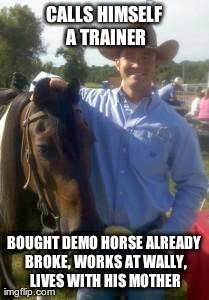 I bet his parents are proud! The one he still lives with at least! Justin also has a website! Justin Mundt As you can tell from the meme there are some issues going on. Who buys an already trained demo horse? That would be the person that cannot train a horse. Why is a trainer still working at Wally World? Hmm could it be because he can't get enough clients? Well maybe if you got out there and actually learned to train a horse instead of sitting on facebook and posting stupid memes about people you might score a few clients. Justin, here's a tip for you, whenever anyone searches your name in google from now on, they will find your page, and they will find THIS page. How's it feel to be all bad ass now?

But enough about Justin. He's posting monkey memes now to justify his existence! 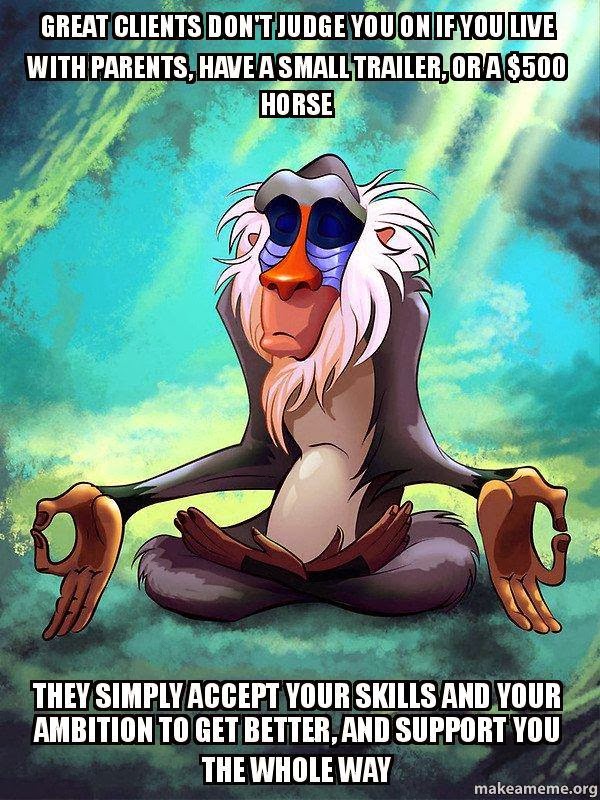 Let's talk about the "mean girls". Now some people say I qualify as a mean girl because, well, let's face it, I say mean things. And I do. But my ridicule usually serves a purpose. I'm outing abuse, poor breeding practices, severe equipment or people that are just leeches on society. Outing these people is like picking on Nazis. You're allowed, because well, they are Nazis. Craig Ferguson had it right when he said The no one cares if you pick on Nazis.

However, there is a new trend now that makes that Lindsay Lohan movie just seem like good clean fun. I'm talking about the "you've pissed me off so I'm going to create a group to bash you" mentality. Yes, you read it correctly. Disagree with one of the little barrel racer screwballs or western pleasure jerk and spur crowd and they form their own secret groups where they sit around and bash you because oh, heaven forbid you implied that maybe using their shitastic bits and having fucked up riding skills was a bad thing. Come on you little deniers youtube is full of your videos showcasing how big a problem you are to the poor horse. So the mean girls come out and think they can trash people, create memes and just be the miserable self entitled bitches they are. Yes, I'm looking at you Leslie Sawyer, Liz Nitz, Rebecca Gonzalez-Cook, Carla Fletcher, Lia Jennson and the rest of Group Shame. You're a pack of ignorant bitches that like to act all bad ass while giving your horses grief and hanging out on your secret groups and bashing everyone else. You want to play bad ass on facebook, well let's see how it plays on GOOGLE where everyone can see you for what you are. Boy that sure will be fun when someone searches you for a character reference and this pops up! Whooot! Ain't it a party. Oh and when I start posting screen caps of some of the shit you say about other people in the industry it will get REAL! You won't be laughing when some other trainer calls your ass out at a show or it costs you a sale. Sure is fun to make racist, sexist, derogatory comments where the whole world can see them. Sure is going to help with the future job searches!

Oh and this blog has been around a long time. I simply lent the name to the facebook group just for giggles. But the blog is mine and will continue to post about all of you until, hmm, well the internet is forever!

Ms. Maus
Posted by ShameintheHorseShowRing at 3:13 AM 83 comments: