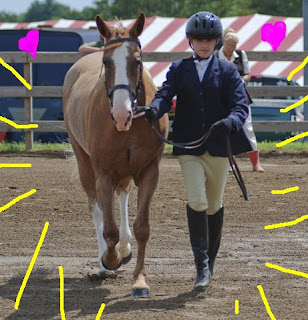 After all of the bitching about BNTs, horse abusers and just dumbbutts in general I thought it would be nice to post about a horse and rider that are real winners. All strikethroughs and red words are mine.

Meet Poppy. Poppy is a mare that has a sad story behind her, but a glowing future in front of her. Poppy made it out of AssHat Hell and into a loving home.

A blog reader writes: I bought her from a complete fricking idiot wannabe "Cowboy". She had previously been seized from another fucktard idiot after a halter had been allowed to grow into her face.

Who the hell lets a halter grow into a horse's face? People that do stupid crap like that should be run over by a horse of hungry javelinas, and whatever is left throw in the manure spreader.

She continues:
When I went to go see the mare, I stood with my mouth open as he put cruel piece of equipment after cruel piece of equipment on her. Then asshat "Cowboy" decides he is going to show me what she can do. So, I watch as he gets on, spurs her and takes off at a dead run. Then he pulls. All 200 lbs of the
Posted by ShameintheHorseShowRing at 11:56 PM 26 comments:

Reichert Celebration...er Free For All

Let’s talk a bit about Western Pleasure, again. When I was starting out WP was a class you did to get your young horses acclimated to the arena and noise at a show. WP was always the start of a career that included cattle, reining or speed events. No one really took it seriously and BNTs didn’t exist for that particular event. In fact it was considered kind of “girly” for the guys to go in a pleasure class.

That’s all changed now. WP is a huge industry. It has purses that beckon like tales of lost gold mines. The horses are priced in the upper levels and the accoutrements will mean a second or third mortgage on your house. A simple class with three gaits and no pattern or interaction with cows has now become the top draw at the stock horse shows. Why? I have a few theories about this phenomenon.

1)It doesn’t take as much time, training, or work to produce a WP horse as it does a reiner/barrel horse/cattle horse. Say what you like but all stock horses can walk/jog/canter naturally. It’s the artificial shit that has to be created through endless circling and canting.

2)Trainers can turn out a WP prospect pretty quick and even manage to make their “mid life crisis” client look good at a slow jog. Trainers dislike having to train the horse and the client at the same time, because criticizing the one that writes the checks is not a good idea.

3)Trainers can get a bigger name faster with WP than they can with events that require real training and skill.

4)People are naturally attracted to sparkly things. Face it, add some silver and sequins and we all end up drooling and speaking in one-syllable words.

5)Trainers perversely enjoy screwing up what nature created. There is nothing natural about the gaits used in WP. Nature created the perfect biomechanical machine and BNTs weren’t happy so they altered the natural gaits in such a way as to make the horses look crippled.

6)It keeps the veterinary pharmaceutical industry flourishing. Those hock injections for two year olds aren’t cheap. Neither are the anti-psychotic drugs and syringes.

7)It keeps the tack industry going. Face it, without all the new fangled training gadgets getting pimped by some BNT there would be no reason for Myler to produce the same bit with 15 mouthpieces. There would be no need for head setters, draw reins, ball spurs and all the other torture equipment that real horsemen did without for centuries.

8)There is no better way to bring up the next generation of riders than to subject them to silver, sequins, riding horses too young, with equipment that is too harsh, and teach them horrible sportsmanship.

The Reichert Celebration is one of the biggest Western Pleasure shows in the world. It brings in stock horses from all over and offers purses that equal major horse races. It’s had its share of criticism for offering classes that promote the abuse of young horses, but on the whole I think the idea was founded with good intent. They do drug test, they do ban blocked tails and they don’t tolerate abuse. Unfortunately they don’t ban stupidity or poor sportsmanship.

This is a tale of two trainers, one of which allowed something to happen that no self-respecting horseman would ever allow to occur.

2)Mr. Hornik should have recused himself to the center of the ring and thereby taken the option of placing him out of the judges’ hands. A true sportsman would acknowledge his major screw up and make a public display of remorse. Instead Mr. Hornik accepts his 11th place award and acts like nothing happened.

3)One of the judges should have seen it. With four judges in the ring, as well as ring stewards, SOMEONE should have seen this horse mount another horse. It’s a fricking show ring. There is only so much space that has to be eyeballed at any given time. The filly should have been given a pass on bucking because of the attack by the stallion. Instead the stallion places in the class. WTF? So Steve Lackey, Beckey Schooler, John Tuckey and Chris Jones I hold you responsible for not seeing this crap. If you’re so blinded by sequins and silver, or trying to decide which BNT will benefit the most from your inattention to the class then you don’t need to be judging. There were 22 horses in the ring, that means that you all had to watch 4.5 horses at any given time. It is not that big a chore.

None of these things happened so the saddle soap opera gets worse.

After leaving the ring Mr. Hornik encounters a disgruntled spectator, the owner of the filly, and gets popped upside the head. Not very sportsmanlike, but understandable because the guy was pissed that his filly might have been hurt and she blew the class after Mr. Horny Hoofs jumped her. Then a brawl happens and everyone is pissed and yelling, police and some EMTs were called. The mother of one of the trainers thinks she’s having a heart attack and a big fistfight ensues. Come on people; is this the image you want the horse loving public to see? Do we need to change it to WWF Western Pleasure? Who the hell does this shit?

I grew up around the Arabian industry in southern Arizona. I cannot recall a single instance of a stallion mounting a mare in an under saddle class, and this includes the classes where kids were showing stallions. It may have happened, but I never saw or heard about it. Brawling? Are you kidding me? Even after years of rodeo, both adult and high school, I’ve only ever seen and heard of a few brawls, and most of them had copious amounts of alcohol in the mix. Western Pleasure brawling? It sounds like a cat fight at the Radio City Music Hall amongst the sequin covered Rockettes.

What has become of this industry? A discipline that encourages low and slow has spawned more high-end drama. A sport with three gaits and no pattern skills has turned into something where even basic manners aren’t put on a stallion so he can show safely.

Here’s what would have happened had it been my mare. I would have pulled her off the rail and immediately ridden to a steward and reported severe interference, meaning he would have had to request the class be stopped. I would have requested the removal of the stallion and the replacement of my horse’s tail. Any decent set of judges would comply. This wasn’t an “oh these things happen” sort of occurrence like throwing a shoe, or a number coming off. This was a physical attack by another horse. Stop the fricking class!

Then later I’d have found the stallion’s rider at the barn and beat the shit out of him with a lead lined tail bag, just because no one that irresponsible needs to be in the show ring. I hope some good comes out of this fiasco. I hope NSBA, AQHA, APHA and ApHC will learn a lesson from this and require more training and more skills from their BNT trainers. I hope they will crack down on the back scratching, drugging, abuse and poor sportsmanship. I hope it, but I doubt they will do it.

Western Pleasure, bring your draw reins, and your boxing gloves.

Posted by ShameintheHorseShowRing at 4:00 PM 262 comments: