Halter; an industry built on greed

Halter. Just the word conjures up images of well-built horses that are the epitome of a breed’s standards. Visions of horses trotting past a discerning judge fill the mind. Reality? No, fantasy! Face it, most halter horses today are such extreme examples of what a breed standard espouses that they should be barred from the ring. Why? Because every single breed standard out there, including the mini horse (which I looked up and read) talks about a horse that can work or perform some kind of duty. Halter horses usually don’t. Don’t inundated me with “but, but, but” because you know one or two halter horses that perform. So do I. I also know of a majority of halter horses that end up finished with their careers at ages when most horses are just starting to work. They are retired early due to “injury”. What injury? Did they sprain their jaws eating all that high protein feed and alfalfa hay? Or perhaps they drove their post legs into the ground too hard and injured their joints. Sounds plausible.

What is halter judging? It’s supposed to be based on these six criteria; breed and sex characteristics, balance, structural correctness, refinement, and degree of muscling. Balance is the single most important characteristic among all breeds.

Let’s look at the AQHA breed standard:
The ideal American Quarter Horse shown at halter is a horse that is generally considered to be solid in color and possesses the following characteristics: the horse should possess eye appeal that is the result of a harmonious blending of an attractive head; refined throat latch; well-proportioned, trim neck; long, sloping shoulder; deep heart girth; short back; strong loin and coupling; long hip and croup; and well-defined and muscular stifle, gaskin, forearm and chest. All stallions 2 years old and over shall have two visible testicles.
These characteristics should be coupled with straight and structurally correct legs and feet that are free of blemishes. The horse should be a balanced athlete that is muscled uniformly throughout.

Sounds like a fairly well made horse. And it’s not what we’re seeing the ring today. The above standard is used in almost all stock breeds.

Definitely looks like the Arab halter horse fits their breed standard more than the stock horses do. Why is this? I like Arabs, but they’ve been focused on “type” a long, long time. They even define “type” by subsets within the breed. You can have Egyptian, Crabbet (English), Russian, Polish and Spanish types.

The stock breeds have types too, such as racing, cutting, reining, WP, EP, foundation etc, but you don’t see all these types being placed fairly in the showring. I have seen Arab shows where all different types are represented in the halter ring, and all are placed based on their type and overall conformational balance. I don’t see that happening in the stock horse halter ring. In fact the main criteria in the halter stock ring seems to be how heavy, and how obnoxious acting, you can make your horse.

Why is stock horse halter such a narrow minded and prejudicial class? Because judges are blinded by big muscles to the point that they will excuse all other faults. The first fault they ignore is movement. Watch this video and tell me there are horses you’d ride in it. The second horse in the ring is very noticeably stifled and should have been excused. I see stiff, jerky and disjointed movement, yet it wins.

Now compare it to this video. Ignore the stupid smoke and note the horses are actually trotting and showing movement that could be used under saddle.

Where does this lead us? To the fact that our halter judges are muscle blind and they will forgive just about every fault, except a missing limb, as long as the horse is built like a feeder calf.

There’s an old poem my sister (she’s a judge) likes to cite. It’s about six blind men that are all asked to determine what an elephant looks like by touch. Each blind man touches only one part of the elephant and concludes from what he feels what an elephant is like.

You have to add it all up to get a picture of what an elephant is. Judging horses should be the same way. You should look at each part seperately and then put them together as a whole. I asked my sister and a few other judges I know how they place halter horses. Three of them use similar methods of rating each “part” on a scale of one to five, then rating the overall balance of the horse and adding it all up. The horse with the highest score wins. To me this is the fairest method of judging, and one that I feel is used very little. I think most judges pick the winner in the first two mintues of the class and that horse is usually the biggest butted animal in the ring.

Just for kicks let's do a little “blind” men examination of some horses. Instead of presenting the whole picture of the horse, which might lure you with pretty heads and cute expressions, as well as big butts, I’ve cropped photos to show just certain sections, and lined them to show where things should be. Included is a visual representation of the horse’s skeleton with some similar lines.


Now that we can see what a horse’s skeleton looks like we can start looking at the horses that are winning in the halter ring today. I’m going to be non-partisan and pick on stock type and Arab type today. 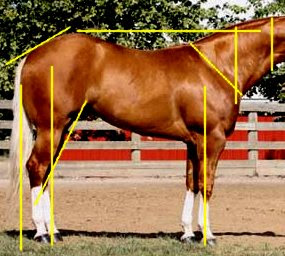 Here’s are first example of what the blind men would have felt:
I deduced that the horse is like an inverted bactrian camel. What is up with a hip that is that much higher than the withers? This horse goes beyond downhill, he’s actually built like a luge chute. He’d also be deducing that the horse’s neck was built like a pork barrel and his hind legs were built like a willow sapling. Had this horse been stood up where his gaskin and hock really want to be he would have been seriously camped out. I actually do almost like the forearm on this horse, but don’t like his pastern. 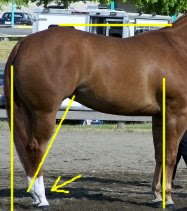 Here’s what the blind man would say: I deduce the horse is like a post. Seriously, don’t you just want to string a strand of clothesline between his legs? Can you imagine how rough this horse’s gaits are with that straight hock, no reach and pasterns like little pegs? His top line is better than the above horse and his hip to tail base is not as drastic. No way he could be camped out, because if you moved his legs behind the point of his gaskin the entire horse would collapse like a bridge without base supports. 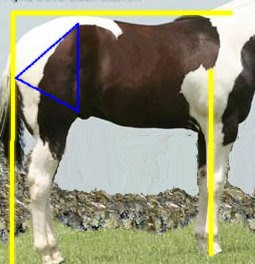 Here’s what the blind man would say: I deduce the horse is like a stump. I like short backs, but seriously, this is a bit too close coupled. More post style legs and no pasterns to speak of. This horse will have no trot! He will not have impulsion. I also don’t like his hip ratio; this horse can’t get under himself to a huge degree. I’m not thrilled with him as a halter horse and I’d like him even less as a saddle horse. 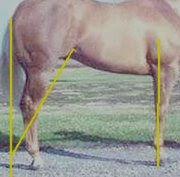 Here’s what the blind man would say: I deduce the horse is like a llama. You think I’m kidding? 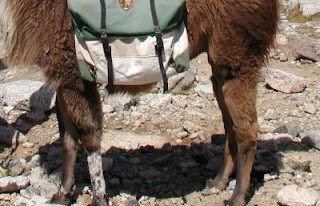 Looks like twins separated at birth, except one has a haircut and a pack saddle.

Just to be fair I think our little blind man would feel this horse and say: I deduce the horse is like a glacial rift valley with a built in ski slope. Come on Arab people! How can I pick on the stock horse industry when you’re breeding backs and shoulders like this? 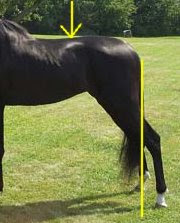 Here’s another one. Believe it or not this is not the same horse as above. Yes, that means there are two of these little gems in the world, just waiting to reproduce and make more. Our little blind man is having a time with this guy: I deduce the horse is like a table. All this horse needs is a checker board and beer stein and he’d be the perfect horse. At first glance I thought this horse was one of those poor abused TWHs I rant about. But no, it’s an Arabian and the owner thought this photo really showcased his horse’s flat croup. It also showcases the horse’s weak hind end, bad pasterns, poor gaskins and nasty hamstrings. 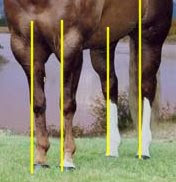 I like a horse that can teach people things, but I don’t need a horse that can teach me how to spell VO. The front legs are base narrow, the hind legs are also base narrow, with a nasty bowing in the middle. Can you say interference and forging? Oh look, more straight pasterns! Must have been a special on them at Horse-Mart. I deduce the horse is like a spelling bee.

Where to start? By now our blind man thinks the horse is like a set of pick up sticks, with good reason. The horse above spells VO, this one spells OX. I can’t imagine what this horse’s trot is like. I imagine it tries to be airy and floaty like most Arabs, but I’m thinking there is going to be some serious interference going on. Think weedwhacker, not hovercraft. Toes out in front, cow hocked in the back, out at the knee, toes out behind. Please don’t reproduce this horse! 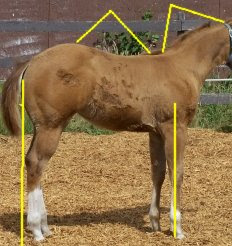 We’re going to leave our little tribe of blind men right now and go over to the tent where the fortune teller lives. She’s a cagey old broad, much like myself, and we’re going to ask her to look deep into her crystal ball and tell us the future of the halter industry. { crackling noises, smoke and mirrors}
Look deep into that ball and tell us what you see.
Posted by ShameintheHorseShowRing at 9:41 PM 47 comments: