Proof that the halter industry sucks......

I had a debate with myself about what to write about next. The Icelandic crowd has been so interesting to deal with, and of course the TWH groups gives me endless fodder, that I was originally going to leave the stock horse industry alone for a few posts and focus back on the gaited horses. That was until I saw this picture. 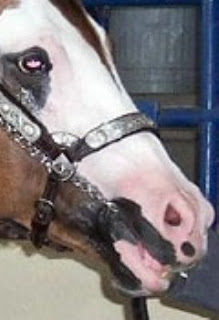 WTF is the exhibitor that is showing this horse thinking? Here’s what I’m thinking:

1) You suck as a trainer. You have no business having a horse at a show. There is absolutely no excuse to hold a lip chain that tight. I don’t care if it is a stallion, if you can’t train him to mind then leave him at home.
2) Your stallion has no business reproducing, ever. He could be the best conformed horse on the planet but you’ve just advertised to the entire world that he’s has such a shitty disposition that he can’t be controlled without having his gums ripped up to his eyeballs.
3) Most breeds do not allow lip chains. Even the TWH industry, which caters to the dregs of the horse world, doesn’t allow you to stick a chain in a horse’s mouth and numb his gums.
4) I find it highly ironic that stock horse trainers talk about how flighty and stupid Arabs, Saddlebreds, Morgans etc are, yet I have never seen one shown in hand with a chain in its mouth. I have seen classes full of stallions, babies, amateur handlers, you name it, in all the above breeds and never seen a horse with a chain in its mouth.
5) I actually have to commend AQHA because they took lip chains out of the gelding, mare and yearling and younger stallion classes. I wish they had taken it further and banned them completely, but at least they finally did make some effort to clean things up. APHA and ApHC have done nothing about lip chains and because of this they allow trainers, and judges, to promote the public image that the Paint and Appaloosa are not good, quiet, family horses. No one wants to buy a horse for their child that has to be restrained by a lip chain. Long-term lip chain use causes damage. It can result in atrophied gums, lost teeth, bite misalignment, as well as damage to the nerves in the corners of the lips. It can also result in injuries from the horse being shanked and flipped over, as this next photo shows. 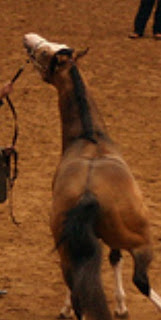 Don’t you love it? The horse has had enough shit and he’s protesting. His lip is being ripped up and he’s doing the head jerk that you rarely see in horses that don’t have chains on their heads. Think about this poor bugger. He’s been fed feed that’s too high in protein, alfalfa hay, kept in a stall 22 hours a day, stuck in a trailer, hauled miles and miles, kept in a strange stall, maybe lunged for 15 minutes, and to punish him for his energy he gets a lip chain. Don’t you just wish he’d rear up and fall sideways and smash that idiot on the end of the shank? 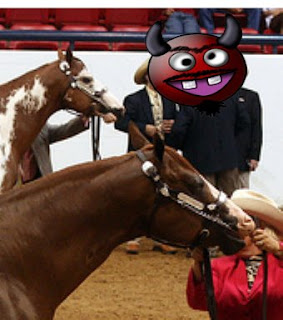 Oh look, two for the price of one! Don’t you love seeing lines of miserable horses standing around just wishing to hell they could knock their handler in the head and run for freedom? Who’d have thunk that a halter horse would be jealous of an Amish plow horse simply because plowing is so much more appealing then getting a lip-ectomy at the hands of some jerk-off trainer? Who promotes this kind of crap? Why it’s the little group of Satan’s minions that not only place poor handling, but they do it themselves when they show their own horses. Let’s just advertise to the entire industry that stock horse halter people can’t train a horse to stand still long enough for a 15-minute halter class. Pretty funny when you consider that Gunther Goebel Williams used to run 7 Arabian stallions around a 45 foot diameter ring, at liberty, and fully capable of killing each other and him at any tim, and never had a problem. Good thing for the halter trainers that he’s not around to show them how to train a horse, he’d embarrass the hell out of them. 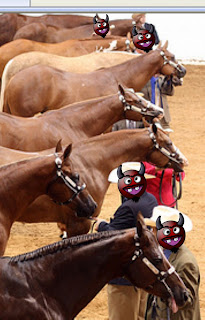 Oh look, another line of Satan’s minions just adding to the misery of the horse world. Notice that the second horse in the class looks relaxed and casual, of course he’s not wearing a lip chain.
The first horse’s expression says it all: BLEH! The third horse is probably dreaming about how much more fun it would be to have a job that didn’t cause such misery; say a taxi-horse in the brothel districts of Thailand or maybe the horse that drags the canal barge along the Nile. Those tourist barges are looking very appealing next to having your upper lip removed via chain gang surgery. 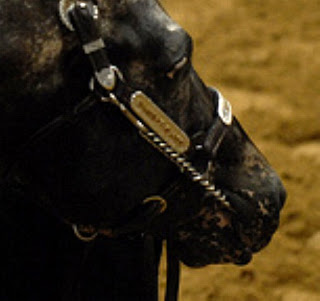 Bet you can’t guess from the mottled skin what breed this is?
The Breed of Choice is choosing to allow lip chains to continue to permeate the show ring at every level. Doesn’t matter if the horse is a mare, gelding or stallion, weanling, yearling or aged. Even the youth and non-pros can show a horse with a lip chain. I have personally see youth exhibitors flip over their lip chained horses. The horses have almost hit the youth exhibitor standing behind them. It’s such a bunch of stupid crap. No child should ever have a lip chain in their hands. If the horse is that unruly then it isn’t safe for the child to show! How much further down the road to bad parenting can you get? Let me guess; you let your child ride without a helmet on a green two-year-old through a fireworks display?
When I started showing using a lip chain was a public advertisement that you were a piss poor trainer or your horse was a complete idiot. It’s actually still the same. People who aren’t in the stock horse industry don’t get it. Hell, even draft horses aren’t shown in lip chains and they can drag your ass down the road. 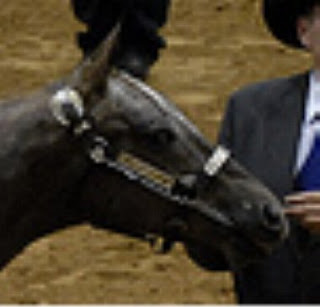 Here’s another one of our little mottled skinned darlings. This is a yearling. A yearling! So this poor little guy must be such a big scary horse to handle that Satan’s minion can’t even risk leading him around without his torture chain? Can you just see what would happen if the US government instituted a “truth in advertising” clause for the horse industry.

Here’s how the ad would read:
ApHC yearling, gums destroyed from lip chain abuse, attitude not much better, kept stalled, fed too much, exercised just enough to make him halter fit, but not enough to let him be a horse. Flips on command. Head shy and hates to have his mouth handled. Don’t worry about him being productive, he’s so specialty bred he’s not good for anything but halter any how!

I can see people stepping up to buy that one

Oh, and aside from the lip chains WTF is the deal with bending over to place the horse’s feet? The non-pros and youth can’t do it in showmanship. Are you telling me some big time trainer can’t even handle a horse as well as a youth exhibitor? It used to be illegal to touch your horse, you remember, back in the day when you actually had to train a horse before showing it.

Failing! The halter industry is failing and the people in it are just making it fail faster by allowing this kind of abuse to happen. You cannot promote a section of the horse industry that allows blatant abuse to go on in the show ring.
Posted by ShameintheHorseShowRing at 11:34 PM 43 comments: