So let’s discuss some screwed up stuff:

I apologize for the delay in posting, the real world has intruded into my online life in an annoying way and I had to boot reality out the door in order to get back to wasting time on the internet.

I received some suggestions via email that led to research, which made my hair stand on end. I’ve developed a rather jaded view of the horse industry, after 30 years the sparkle is off the sequins and the leather is starting to crack, but even I’m shocked at some of the new fangled ways to torture a horse that people are coming up with. There were also a few that made me whack my forehead and feel shame that I hadn’t covered them already. I’m going to start with some of those and then develop the others for later blogs.

Let’s look at how the show ring makes us think and talk. I don’t think horse people realize how odd we sound until a non-horse person points it out to us. My life is compartmentalized into horse and non-horse people. The non-horse people are more prone to giving me odd looks and asking “What do you mean?” And I don’t think we realize that some times terminology gets misused to a huge degree and propagates the misuse of equipment and training methods.

I’ll start with a simple one that has endured massive misuse, both as an equine term, and a training method.

I’m talking about the dread SPUR STOP. A Spur Stop is just that, it’s stopping your horse by applying your heel or spur to his side. It’s a cue used to avoid touching the horse’s face. Now generally I’m all in favor of a cue that means there is less pressure on the mouth. The problem is that this little cue creates all kinds of other problems when you try to use a horse in other disciplines. Touch a Spur Stop trained horse with your heel going over a fence and you’ll find yourself flying through the air like Peter Pan. Hit a barrel horse with a Spur Stop and you’ll lose time, and money. Outside of western/english pleasure it serves no purpose and most good judges will mark you down for it. 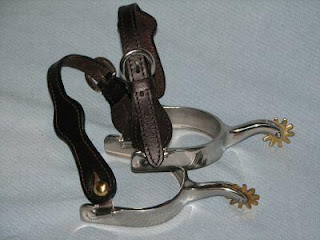 This leads to another problem. People use, or rather misuse, the term Spur Stop and don’t know what it means. It’s a simple concept, made harder by ignorance. I once argued for several posts about Spur Stops with a woman that was describing a regular stop. She engaged her seat, then her upper leg and finally lightly touched the reins. Well fucking duh, that’s how you stop a horse. That’s not a Spur Stop, that’s a regular stop. She was arguing in favor of a term, yet she didn’t know what the term actually meant. Most good WP horses I’ve seen are not trained to actually Spur Stop. Instead they work mainly off a shift of the seat and upper leg. Well hello people, classical riding as been doing that for centuries. A true Spur Stop means you poke the horse with your foot and he stops. End of story! No seat, no upper leg, no bit. Even the illustrious Pleasure Horse Forum argues the merit of this ultimately stupid cue, and half the people arguing in favor of it don’t know that what they’re describing isn’t a Spur Stop. If you’re going to fight about something then at least know what you’re arguing about.

Let’s look at another term: Headset
I fricking hate this word. I hate what it implies and I hate how people abuse the hell out of horses to get it. Headset seems to mean that your horse sets his head in one spot and never moves it again. I’ve seen people with draw reins, rubber reins, martingales, and every other gadget on the planet, struggling to create a headset. If you want to know what your horse’s headset is then wait until he’s in a relaxed trot, on loose rein and see where his head goes. That’s his natural headset and one you should not be struggling to alter.

Back when horsemen actually trained horses for longer than 90 days and made sure a horse was solid on each gait and maneuver before moving on to the next one, it was accepted for a horse to reposition his head at different levels when changing gaits or maneuvers. Anyone that has ever ridden a big jumper or good cowhorse knows that an athletic animal is going to re-adjust his body for the optimum range of motion and the most efficient way to get the job done. This will involve moving his fricking head, up and down, side to side. I am so sick of seeing pleasure horses whose heads never move even as they change speeds, stop and turn. I say “never move” in the context of they don’t go up at the shoulder to actually collect, since they can’t collect because the rider is constantly plucking and twanging on the reins in order to maintain the “headset”. 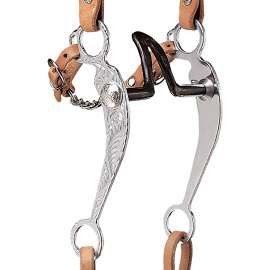 This brings us to our next word of the day: Collection
I don’t hate collection; I hate the fact that even big name trainers don’t know what the fuck it is. In simplistic terms collection is when the rear end of the horse is engaged, the neck lifts from the shoulder and the horse is rounded. A flat top-lined horse is not collected. A drop headed, behind the vertical horse is not collected. A horse may be heeding your every cue. He may be slow, cadenced and quiet but he is not collected if his back is convex and his rear isn’t engaged. And you cannot engage the rear and shoulders if the head is dragging in the dirt. It is physically impossible. Simply yielding to the bit is not collection, it’s giving to pressure. And knowing some of the mouthpieces the BNTs use I’d yield too, rather than get my palate torn to shreds. So all of the little show monkeys sitting on their head dragging horses at the Reichert have no clue what collection is. This term has been so abused by the pleasure horse industry that the government should fine them a dime for each misuse of the term and they could build sanctuary to care for used up old pleasure horses.


After collection comes another term that just sets my teeth to grinding: Frame

I’m sure the first trainer to use the term frame had a clear vision of a flexible, freely striding horse that stayed in a nice rounded, collected form, moving lightly and well within its physical abilities. Then some other less talented, and more gimmick driven, trainer got a hold of the term and used it to mean a stiff, robotic moving horse, over-flexed and frustrated by heavy hands and a leaden seat.

The term frame now implies a rigid, square, heavy, over-gilded form, much like the average pleasure horse with his flat back, stiff movement and silver encrusted saddle. Let’s banish that term to a softer, and more visually pleasing one.


Here’s another term that just makes me want to force my head to meet my desk: Lope with a forward motion.


The AQHA came up with this little ditty because they were too chickenshit to tell their judges to only place horses to could actually canter with the proper number of beats. How the hell else do you canter? Is there a canter with backward motion? Canter with upside down motion? Come on people! When an organization as big as the AQHA makes this kind of statement, showing the equine world that their judges and exhibiters have to be told how to properly canter a horse, it tells you have far down the slippery slope of stupidity we’ve gone. Lope with a forward motion? Pleeeaaassseeee! And to add to the morass of stupidity the ApHC and APHA both adopted the term for their own rulebooks. Hmmm lets tell the whole world the entire stock horse industry can’t figure out how to canter their horses.

Okay share the terms that piss you off. I know I can’t be the only one frustrated with this crap.
Posted by ShameintheHorseShowRing at 11:32 PM 130 comments: