" Model Citizens of the Horse World"

Let’s talk a little bit about egos in the horse world. Ego is what the entire show system is about. Let’s be truthful here: The horse doesn’t give a crap whether it is ever shown or not. He doesn’t care if he ever rides in a trailer, or gets his feet polished, or carries around a fake tail. The horse exists to eat, shit, possibly make babies and enjoy being worshipped as the extraordinary animal he is. He has no use for ribbons, trophies or full-page ads. However, the horse is rarely asked for his opinion, and because of this he is subjected to one of the most horrible things on the planet: The human ego.

What does the ego do? Webster defines the ego as: the part of the psychic apparatus that experiences and reacts to the outside world and thus mediates between the primitive drives of the id and the demands of the social and physical environment.


One might also define the ego as: The psychic apparatus that compels some sorry piece of shit trainer to drug, beat and harass a horse into a completely artificial frame in the pursuit of a small piece of satin.


We see this a lot, in every breed and every discipline. There is not a single show system in the world that is not governed by ego. From guppies to draft horses it takes someone with a will to win to subject an animal to the processes of showing. The difference is that if you beat a guppy or a gerbil it would die. Horses, unfortunately, can take a lot of abuse before succumbing and they are usually silent about it.

Do horses enjoy human companionship? Certainly. Horses even, in some cases, enjoy the work that goes along with being ridden. I’ve seen horses jump for fun, or cut cattle with no rider on them. I’ve seen horses interact with humans in a way that makes dogs seem like pikers. Horses can love their people. However, they need people that love them back to care for them. This is usually not the case with Big Name Trainers. I’ll state right now that I’m not remotely jealous or concerned about winning anything, I have an entire king sized bed quilt that is made out of sewing together my horse show ribbons, complete with rosettes. At my age I’m happy to report and observe. I appreciate a well-trained horse. I appreciate a skilled and empathetic rider. I rarely see either in the show ring today. What I do see are horses that are bent, spurred, starved, worn-out and tortured into frames and robotic mindsets.

The hardships forced upon horses in the show ring are appalling, but what is even more ridiculous is that after being caught, suspended and/or fined for their actions the BNTs think that a few months or years after their indiscretion everyone should forgive them and they become “model citizens”, never to be sneered at or avoided again.

Here’s my take on it: Horse abusers, like child molesters, can never, ever, reform. They may not get caught doing it in public, but they are still doing it. Anyone suspended for physically abusing a horse should be banned for life. One strike and you’re out. I’m not talking about an accidental spur mark, or making a raw spot on the corner of the mouth. I’m talking about welts, edema, ripped lips, bleeding tongues, you know, like the horse, Slow Lopin Scotch, that was abused to a horrific degree while residing at Cleve Wells’ ranch. This fiasco cost Mr. Wells his Professional Horsemans’ Association card as well as a one-year suspension from AQHA and a $10,000.00 fine. 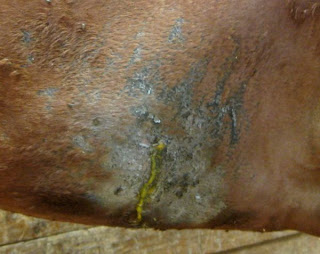 And even after all this there are still dumbasses on the Pleasure Horse Forum that are defending him. Why? Because he’s won sooooo much. I don’t give a shit if he wins the Nobel Peace Prize he’s still a complete fucktard for having a horse come off of his ranch in that condition. I suspect that in a few years the AQHA show world and all the wannabes and “excusestrians” will be lined up behind him again, worshipping his winning ways and trying to be just like him. 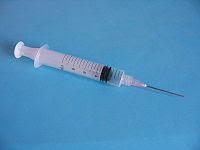 After physical abuse comes drugging to win. Drugging a horse with fluphenizine or reserpine in order to show it is extreme abuse. It is the ultimate in poor sportsmanship and it is a crime that should never, ever, be forgiven. If you use an anti-psychotic in order to try to win then you are a piece of shit. You have no consideration for your horse or fellow exhibitors. If you are a trainer that puts a kid on a horse that has been drugged with one of these two then you should be charged with child endangerment and sentenced to jail. You do not get a free pass back to being a “model citizen” after serving your suspension and paying your fines. You are forever a POS BNT.

The two forms of abuse are not mutually exclusive. One particular BNT trainer in the ApHC show world (think serious “Drequitation”) was busted for fluphenizine in 2003 and was also caught riding his WP horse in the warm up pen, the horse wearing a racing blinker hood, and popping the horse in the head with a stick to make it lower its head. This is a witnessed event and a complaint was filed, but subsequently shoved under the rug.

Abuse breeds abuse. Don’t ever think it doesn’t. On the days the horses aren’t getting stuck in the vein then they are getting the physical ill treatment. The constant spurring, plucking and checking show such a lack of skill it’s a wonder that real horsemen don’t run these assholes out with pitchforks and torches. We know the judges don’t have the balls to do it, especially in the ApHC, because they ride the same fricking way.

The other effect of the abuse is that the instigators of it get all offended when someone points out their past and doesn’t buy the “born again” non-horse abuser act. I really don’t care if you haven’t been busted for a few years, we all know of the back scratching and fear of retaliation that pervades the industry. Anyone with common sense knows that you haven’t changed you ways. You’re still in it for the money and the bragging rights. You’re still catering to clients and trying to sell horses. Anyone of you could be caught in the warm up pen late at night thrashing some horse. This is where video cameras and cell phone cameras are going to start catching up with you. And we all know that with the exception of a few very high end shows not every horse in every class gets drug tested. A respectable Top Ten win, on a reserpine horse, is just as good an advertisement, and less likely to get you tested, as winning. And by the way, when two BNT decided to start brawling outside the main show ring at the Reichert, because one of them is a whiney ass because the other took his client, then don't be surprised if people dump your ass because you have the maturity of a toddler. Maybe that video will make it to youtube one day.

I can already hear the Pleasure Horse Forum screeching about “forgiveness” once the suspension is over. Bullshit! There is no forgiveness for a person that abuses or drugs a harmless animal. The fact that most of the people on the forum have a moral compass that endorses and even supports this attitude tells you how sorry-assed the pleasure horse industry is. They even came out in support of a trainer that used fluphenizine on a horse because “he’d done his time” and he’s an “angel” now. Then they started trashing a person that spoke out against his past actions and started trashing her facility even though none of the sorry wannabes had ever personally seen it. I found this ironic since the one wannabe is nothing more than an ex-groom and has never shown a high level winner in her life. Perhaps she’s dreaming of the day she too can jab a needle in a vein and compete with the rest of the incompetents. Nothing like ass-kissing with the PHF to make your career. Oh, and according to the PHF denizens the poor horse-abusing trainer just had his poor wittle reputation ruined because someone brought up his past behavior. What a crock of shit! He ruined his own reputation by drugging the horse with an anti-psychotic. I’d barf, but I’d hate to replace this laptop.

Here’s the deal: There is no forgiveness for abuse or drugging. You do not get a free pass back into being a reputable trainer. And even more to the point: You stupidly brought it on yourself and can’t blame anyone for being such a fucking moron. Here’s another clue: No one that discusses your past is the bad guy! You are!

Let’s put public recognition and abominable behavior in perspective: In 1938 Adolf Hitler was voted Time Magazine’s Man of the Year. Yeah, we all know what he went on to do. And we all know that there are a bunch of sheet-wearing dumb asses out there that still condone his actions, because his goals and theirs are the same: to win at all costs, no matter whom you hurt or kill. Some show people are the exact same way. They want to win, no matter how many horses they go through while reaching for that worthless piece of satin.

I’ll end this blog with one of my favorite quotes by Thomas C. Haliburton:

“The only way to reform some people is to chloroform them.”

I couldn’t agree more.
Posted by ShameintheHorseShowRing at 10:55 PM 34 comments: