Things we learned about the horse show industry in 2008.

I went back and reviewed my blog entries and some of the replies and if I was to take them at face value as being reflective of the horse industry then this is what I’d think:

1) Any amount of abuse can be justified as long as you can blame another breed/discipline/organization for something you think is worse. 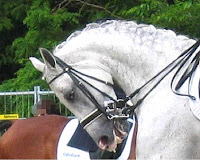 3) WP riders don’t have a problem with tail blocking. Despite the fact it can cause long term damage and is uncomfortable for the horse. Nothing like having to wait for your human to remove the packed in shit from your rectum after they've numbed your rear end so your tail can't lift.

4) Some saddlebred people can’t read or understand a URL. I posted this link: http://www.meadowwoodstables.com/photos_and_sale/photo_detail.php?horse_id= and endured endless complaints on the trot.org forum that I mislabeled the horse. I didn’t do shit, the people that own meadowwoodstables.com are the ones that labeled the photo. I was merely commenting on the fact the horse’s tail had been done, which it is obvious it had.

5) Most WP people condone the use of spur stops, without having a clue what a real spur stop is. The most vehement proponents of spur stops actually described a leg/seat stop, which is normal. If you’re going to bitch about being in favor of something then at least know what you’re talking about.

6) According to the WP and HUS people trainers shouldn’t have to have good equitation because they are trainers. How fricking stupid is that? It’s a horse show. This means that the best of the best are competing. Not the best of the leaning back, mouth chucking, spur stopping, heels up, no riding pieces of shit trainers. I was actually shocked that people said things like “trainers don’t have to ride pretty”. Of course they do. “Pretty” is based on centuries of riding mechanics that complement the horse, instead of hindering it. If the horse is good with a shitty riding trainer imagine how wonderful he’d be with someone that actually had a good seat and knew how to use their legs!

7) It’s okay to ride two year olds because everybody does it. Forget the growth requirements of the horse’s frame. Forget the mental and physical stresses that a horse goes through, it’s okay because the Big Name Trainers ride two year olds, it happens in every breed and every discipline.


8)It’s okay for a judge to harass and abuse a child, because being a carded judge absolves you of all ethical considerations. Carded judges can do anything and get away with it because they belong to the Good Old Boys’ Club, also known as the “I’ll Scratch Your Back If You’ll Scratch Mine” Club. 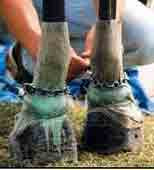 9) The Tennessee Walking Horse Big Lick industry will never be reformed because there is too much money in blatant cruelty. Shame on the TWHBEA for being such a bunch of chickenshits that they don't put a stop to this crap once and for all.

10) The stock horse industry has no idea about what a real Hunter looks like, and they are blissful in their ignorance, to the point of being orgasmic about it. 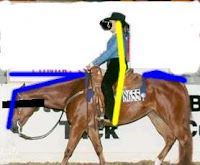 11) People enjoy posting their brag photos all over the net, but go fricking crazy when you point out how crappy they are riding, or how bad they are making their horse look. They are as bad as people that walk up to a judge and say “Why don’t you like my horse?” Honey, it isn’t your horse that’s the problem. Most judges love your horse; they just hate what you’re doing to it.


12) The Pleasure Horse Forum will defend to the death their Big Name Trainers, even to the point of deleting posts against one, until it becomes a big story, then they pretend to be offended. If the pleasure industry hadn’t been turned into the stock horse version of Big Lick IE completely artificial movement and cruel training tactics, then there wouldn’t be so much abuse to bitch about. 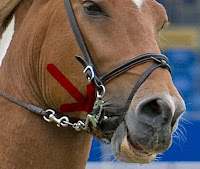 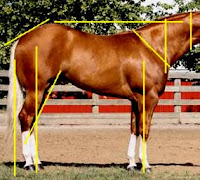 14) The halter industry, which is supposed to be producing each breed’s ideal horse, actually produces the worst conformations and biomechanically unsound horses out there. There is no flaw so bad that a big muscled ass and huge forearm can’t excuse it. I’ve come up with a personal slogan for the halter industry “Anything from the elbow down doesn’t count!”

15) Lip chains are okay, because being a lazy piece of shit trainer, that hasn’t a clue how to handle a horse, is the norm now. Forget training, forget the fact that being at a show means your horse, and skills, should be the best! It’s all about showing the public you are such a piece of shit you need to lip chain a weanling filly. Just how much more bad-ass can you be? Perhaps we should get you a basket of kittens or baby bunnies to torture, because they are sooooo dangerous at that age. 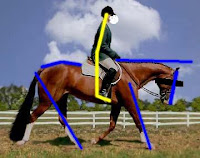 16) The WP and HUS riders really have no clue how to create collection, or what collection involves. The concept of collecting from the shoulder and rounding the back and hip is alien to them. To the WP industry collection is a vague term that means the horse isn’t running away with you in the arena. In other words, if you can tug/check that horse every other stride he’s collected. 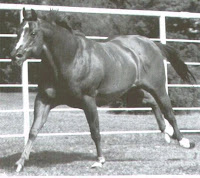 17) Genetic defects are fine, as long as the bloodlines that produce them are high dollar horses. The stock horse industry has become the go-to place to get all kinds of genetic problems, which any self-respecting real horseman would never consider reproducing. Sadly it looks like the Arab industry is going there too.

18) The horse show industry is absolutely saturated with enablers. Doesn’t matter which breed, or which discipline, these people will defend every abuse, atrocity and poor training practice because it’s part of their traditions.

19) Some saddlebred people are in complete denial about the shit that goes on in their industry. Weanlings in bitting rigs? Never happened. Forget the video proof, it never happens! Yearlings in bitting rigs? Never happened! Forget that Mr. Big Name Trainer recommends it on his website, it never really happens. Tail gingering? Can’t be stopped. Forget that there is a very simple test for it! It simply can’t be stopped because everybody does it! I have to say that the ASB people that posted here to “defend” their practices were the most unknowledgeable group I’ve ever seen. They didn’t even know how the bits they use work. They don’t understand biomechanics, morphology or the laws of physics. It boggled the imagination to read their statements and realize that there is an entire show industry built on this type of ignorance. My respect for the breed skyrocketed because it takes the most tolerant and kind horse in the world to put up with the kind of shit that gets thrown at them.


Of course most of the above is tongue in cheek. I really don’t believe any of the “justifications” and “enabler” bullshit. The horse show industry is so piss poor right now because people are too lazy and too unethical to clean it up. It’s only when a huge case pops up, like Mr. Wells, that the stock horse industry even pulls its pointed little head out of the sand. Why the hell do you think that horse was abused to that degree? It wasn’t because he was a bad horse. It was because he was being beaten into a frame and way of going that are unnatural to the horse. He couldn’t do it because he’s not made that way. Yet in order to be considered worthwhile, and to promote the trainer that abused him, he had to conform to this artificial ideal of what a WP horse is supposed to be. This isn’t the first major WP abuse case, and it won’t be the last. The more the show industry encourages artificial movement and the abusive techniques used to get it, the more of these cases we’re going to read about. 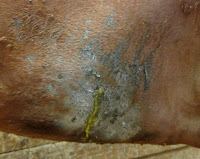 I can only hope that 2009 will bring about an improvement in the treatment of the show horse, and the intelligence of the people responsible for it.
Posted by ShameintheHorseShowRing at 9:23 PM 55 comments: