Make Mine A Draft

The topic of the blog today is by request from several people bemoaning how their section of the horse industry has taken a wrong turn.

I think secretly all horsemen love the sight of a draft horse. Not only are they the embodiment of power, but also they represent a time when simply being a good horseman gave you cachet within society. Most honorific titles in ages from Alexander the Great to pre World War II spring from the respect due a good horseman: Chevalier, Cavalier, Caballero, Sir (knighthood), Ritter etc.

Sadly the draft horse went through a down period that started right after World War II and continued for almost 50 years. Other than pastoral societies, such as the Amish, Mennonites and Third World Countries, the draft horse fell out of use due to mechanization. Once tractors appeared on the scene a good draft horse was worth a quarter of what he’d previously been valued. Some breeds survived the down turn and some didn’t. The group that monitors rare and exotic breeds has speculated that almost half of the world’s breeds of draft horses have disappeared or have been absorbed into other breeds.

Thankfully, we’ve seen a resurgence of interest in drafts and many breeds are now growing. The ever-popular Clydesdale sells us Budweiser, while the striking black team of Percherons that Southern States owns tries to sell us farm supplies. In the east a drive through Amish country will reveal teams of Belgians and half drafts plowing the fields. Fox hunting country will yield more half drafts, which are prized for their size and ability, as well as their steadfast temperaments. The draft is at least holding steady, but there are some blotches on the horizon.
Let’s discuss something that is going to really piss some people off: Gypsy Vanner Horses. I’ve seen them at fairs and expos and can’t say that I’m impressed. They don’t have the size of the big drafts, nor the elegance of the small draft. In fact some of them are hideous. And I do mean hideous! In a breed where a roman nose is accepted and even adored they go way beyond the norm and have ugly heads. 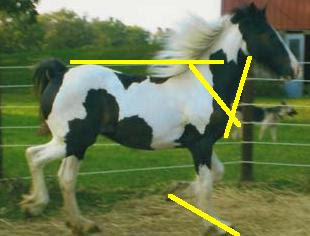 Let’s get real here. Horses like this aren’t worth ten grand. They aren’t worth five grand. Mostly they are worth carcass weight unless you can get them trained to be the quietest, most ridable/drivable horse out there. We can forgive ugly if the horse is at least useful. 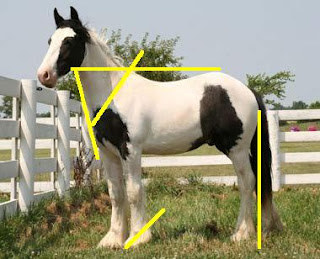 Really, I’m serious. Even if the horse is puurrttyyy colored, and a draft, it’s not worth shit unless it has all the other components of a good horse. This horse is not a good example of conformation, draft or otherwise, and certainly isn’t worth the $10,000 he’s listed for on dreamhorse. The Gypsy Vanner trend has revealed several things to me.

1) Americans will pay money to import anything, even if it is a piece of shit
2) The Irish and English have a great sense of humor in regards to selling Americans low quality horses for outrageous sums of money. Perhaps they are getting back at us about that tea party thing in Boston.
3) Color is still a primary consideration over conformation, doesn’t matter which breed, how big or small. 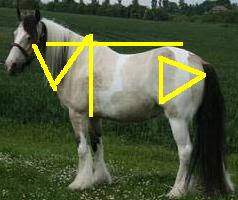 Yes, someone paid money to import this mare. 100 like her could be found at any Saturday livestock auction, with the exception that the auction horses would probably actually be trained.

I expect this kind of shit in the stock horse industry. I find it impossible to comprehend in a division of the horse world where rare breeds outnumber the regular ones. Why would you reproduce crap when there are only 500 horses of that breed in the world? It makes no sense at all. Look at what happened to the Friesian. They pop into public consciousness in LadyHawke, get another boost in Zorro (although how the movie makers made the leap from Dutch Carriage horse to Andalusian I will never know.) Next a few people really get on the importation bandwagon and a short ten years later we’ve got crappy Friesian everywhere, crappy Friesian crossbreds everywhere and the breed is littered with breeders going bust because they invested high and sold low. Why is it that horse people are always the last ones to understand “Supply and Demand”? 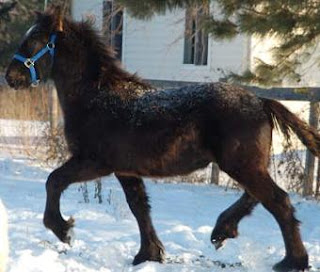 This is not the best of both worlds here. A Friesian/Percheron cross that embodies the worst traits of each breed is not helping the industry. $4,500.00? For what?

I know, I can already hear it: But they make great Dressage horses! Some of them do, after several years of intensive training. But Joe Bob with the backyard Vanner or Friesian cross isn’t going to put that training on them. You’ll be lucky if he halter breaks the damn thing. No, he wants to produce the horse, expects you to bail him out of his bad judgement with a hefty price and then you get to train his low end horse so it has a job which will hopefully keep it out of the slaughterhouse. I’ve been to plenty of Dressage shows and I have yet to see anyone competing at high levels with a Vanner. And the Friesians I see in the upper levels don’t look anything like the ones you see on dreamhorse. Just because something comes from an exotic breed does not mean it merits reproduction. Even rare breeds have poor examples! 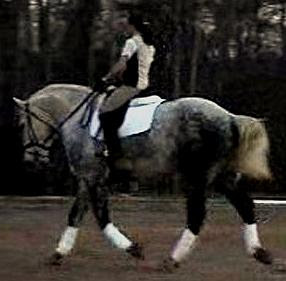 If all drafts looked like this I’d have a few myself, but most don’t. Instead they are bred to either look like plow horses, and all the faults that brings to mind, or they are bred so stylized that the traits that make them desirable have been bred out in the quest for typeyness.

The draft people are also hiding a naughty secret. Seems like owning a huge, pulling machine isn’t enough. Now the drafters are going the way the stock horse halter industry is and using the needle to put the “muscle” on their horses. They are also using more gimmicky methods to make their show horses more showy. Why is it that in hand classes always go corrupt so quickly? It’s the least useful thing you can do with a horse and harbors the worst offenders. Is there really going to be a time when draft horse stallions need to be shown in lip chains? When horses on “roids” are the norm in the in hand classes? Why is the draft horse industry going down the trail that ruined the halter industry?

Let's hope the people involved with these horses wake up and protect the good ones before the poor breeders, and bad trainers, ruin even this small section of the horse world.

Posted by ShameintheHorseShowRing at 9:25 PM 136 comments: