Tie me up, tie me down

When it comes to tie-downs, and the proponents of their use, it's a losing argument.

Why was the tie-down created?

Tie-downs were created to keep the horse from raising his head above a certain level. As in, to literally tie the head down. Some are bonnet style which go over the ears and around the crown of the horse's head. Others go over the nose. There is also a combination of both in the headstall style. Then there is the 'head-setter' tie-down that tightens. The point is, they are called tie-downs because they were created to tie the head down and prevent it from going up above a certain point. 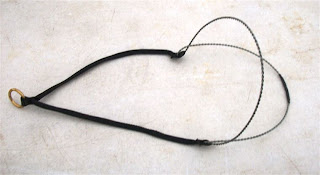 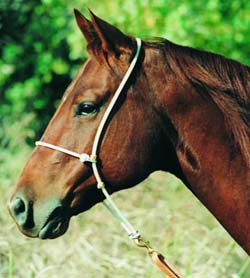 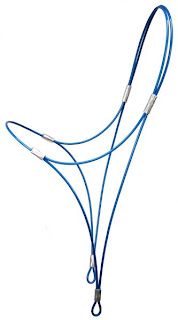 3 out of 4 people who use tie-down's, especially barrel racers and ropers,  will tell you their horse 'needs' a tie-down to 'brace' on when running or stopping. This is absolutely NOT true. Horses running full speed at liberty (and even with a rider) will brace with their hind legs and 'drift' forward with their forelegs, while lifting their shoulders and neck. This is the natural way of things. Think of a reiner's sliding stop, that is basically how it is done, only less flashy. If your horse cannot carry himself and needs something to lean/counterbalance on then there is much more wrong than you thought. Either with his training or with his rider. Horses should naturally carry themselves, and balance on their own when maneuvering. They do not 'need' anything to help them do what nature already intended them to do. 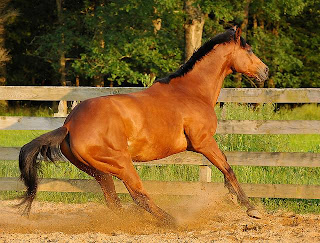 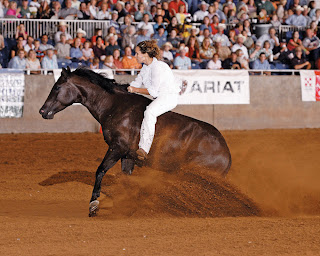 What they affectionately call 'bracing' is due to heavy contact on the bit, as in to getting them to stop, and the horse wanting to avoid the bit and the rein pressure by throwing his head up. Much of the time this would mean hitting the rider in the face with the neck, or running away head jerked up and back, going through the bit to avoid it and the pressure it exerts.

And the argument that a horse with a tie-down cannot rear is also absolutely not true. A horse in a tie down can very much still rear, and quite a few have.

Let's face it. It's purely a crutch, a bandaid for bad training or lack of training.

The horse uses its neck, spine, and tail for balance. If you tie his head down with a tie-down you are basically asking a tight-rope walker to walk a tight-rope with no hands. That means the horse is using you and the reins for balance whenever he cannot stretch out his neck when needed. Ever wonder why so many horses trip, fall, and tip over while turning in barrel races? Most, if not practically all, are wearing tie-downs. 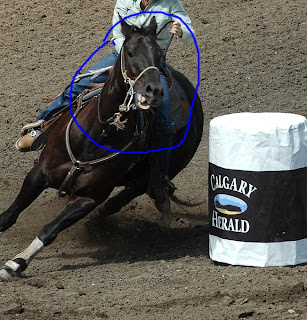 Tie-downs also pose more than one danger for horses. Think about this: You're cantering along and your horse trips in a small hole and goes down on the forehand. With his head tied down he cannot put his head up and out to regain his balance. What about if he should fall on a turn and get his leg caught in a tie-down used without a breast collar (which is seen far too often)? You'd have a nasty accident.

A naturally high-headed horse forced to wear a tie-down can actually be made to be in pain. Or he has a high neck/head set and that is what is natural to him, instead of teaching him to round up, come into the bridle and onto the vertical, tying his head down can cause, an upside down neck, stiffness, soreness, and even neck vertebrae issues. If the horse is not high-headed when he's in the paddock or at liberty but is when you put a saddle/bridle on him and climb on his back that usually means you have a pain, tack, fitting, etc issue. It's not the horse, it's the equipment/rider causing it. Slapping a tie-down on to stop this behavior on a naturally-lower headed horse that puts his head/neck up when being ridden will only cover up the pain/pressure/sensitivity he is trying to convey, or even cause him pain.

Whoever thought this up and made it the okay/normal thing to do needs to be shot, and if they survive, shot again. A gag bit is a pulley leverage bit. Gags with shanks are very severe, sliding gags with a gag mouthpiece also are the worst and most severe. It climbs up the mouth/face higher and higher with rein pressure. This asks the horse to raise his front end, put his hindquarter under, put his head up and his muzzle outward. A tie-down asks the horse to lower his front end under and bring his rear up, put his head down and holds his muzzle inward. These are two very conflicting, very opposing signals. Basically the horse's head has nowhere to go and if it attempts to move its head either way it is met by sharp resistance. A tiedown and a gag, lifter, elevator, draw/sliding gag, or any kind of bit used to 'raise' the head/neck/forequarter should NEVER be used together.

Using a tie-down on a speed horse can actually decrease his overall speed, as he cannot stretch out, flatten himself, and run from his center of propulsion. He cannot run properly with his head tied down being unable to use his neck properly for balance.

If you think you 'need' a tie-down, let me just say, you DON'T. You, as a rider/trainer need to go back to training and horse's anatomy 101.

I've sold the blog, no not to the little crazy asses on facebook, and will be transferring things over to the new owners this week. There will be some guest bloggers and posts, so stay tuned.


And the new owners know about the group of facebook shitwhistles, so they'll still be featured as long as they act like such a group of douche bags.

It was nice knowing and posting for all of you, now it's time to continue with my real job and let others take over the reins and shine the light on horse abuse in the show ring.