I’ll be the first to admit I don’t know a whole lot about Missouri Fox Trotters. I know they are a nice, tolerant breed, with a rather interesting history. I know they make a great family horse and that they are known for their smooth gaits. I’ve seen a few in real life and admired what I saw. The horse below is a treat to the eye and he’s everything a relaxed, happy, gaited horse should be. He’s not wearing ridiculous pads, he doesn’t have his tail nicked or in a brace, his headset is natural and he has a kind eye and demeanor. He’s a far cry from a jacked up, in pain, head-cranked-back walking horse or saddlebred. 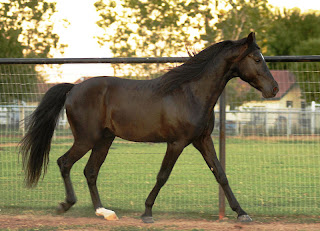 I would have gone about with this comfortable illusion if a reader hadn’t tipped me off to the rot in the MFT industry. I would have preferred to remain ignorant, but the videos are just too fricking much to bear. Exactly when did it become okay to ride a horse like a drunken idiot, wearing ill-fitting clothing, using western styles that have been dead for 20 years (buckstitching, really?) and jerking the shit out of your horse’s mouth? Well color me fricking surprised, but last year’s MFT Celebration seems to be the happening place for all of these things to happen.

To quote someone that was at the show:
In the open 5+ Performance, Entry #579 “Grand Central” with Thomas J Williams became “World Grand Champion 2010”. It will be forever a secret, how 5 judges could make it possible to place 1st this horse with this rider. A certain group of visitors was enthusiastic, screaming hysterical about the manner, in which “Grand Central” made his rounds with much animation, but the question remains open, how he could get such an evaluation in Walk, Foxtrot, Canter, Conformation and EQUITATION.

EQUITATION? Are you fricking shitting me? The rider looks like Quasimodo’s brother, after a serious bender, riding the most pissed of horse in creation. I SO wish that poor horse would just LOSE it and dump his hunched over ass in the dirt and then fox trot over his head!


I give WP and HUS riders hell all the time about their lack of equitation but this guy really reaches a new low. And I don’t want to hear SHIT about how “that’s how you ride a gaited horse.” Bullshit! The guy on the palomino doesn’t have his toes pointing at the ground! He’s not hunched over like he’s about to barf all over his horse. And that head nodding that is supposed to be so natural is being brought about by jerking hands and spurs. We can see with our own eyes that the horse that won the class was the LEAST suitable! What a load of horse shit! Shame on the MFT Celebration judges for placing this travesty of riding!
So after watching that 15 minute video I thought: Surely this is an isolated incident. I’ve never really heard of the MFT having the abuse and other industry problems that the other gaited breeds have. How wrong I was! (see it can happen even to me!) I searched youtube and came up with some more videos that made me want to hurl up my angrily chewed M&Ms.

Here we go again, same sorry-assed rider on a TWO YEAR OLD ( and we all know how that pisses me off!) and he’s doing the same crappy riding method!

WTF are you doing with that shank bit on a two year old? You abusive bastard! Get your big ass off of that horse and walk for yourself. You look like a caveman on a Shetland pony for Christ’s sake. And the judges placed this shit? It makes watching the Reichert bearable. I’d have to tune into the TWH Celebration just to get the images out of my mind!
( By the way Tom, the constantly jerking up and down of your hands makes you look like you’re beating off on this poor horse’s back. I’m sure you’re getting off on the ride, but no need to let the rest of us know how much you enjoy it.)

These are just “are you fricking shitting me” video moments! I had no idea that this crap went on. It surely can’t be the norm. So I looked further and found a few MFT videos that didn’t look like some un-evolved creature having sex with his hands on a horse’s back.

Here’s another case of the kids riding better than the adults. Can’t say I’m too crazy about the long shanked bits and buckstitch, but the equitation is leagues above the other guy!


And here’s an amateur class that looks many levels above the World Champion ride Mr. Tom “Let’s jerk the shit out of my horse” Williams turned in.

I could ride one of these stalwart fellows all day (minus those shitaceous bits) So why can’t the pro trainwhores figure out how to ride and make it look natural? Why does every pro make riding seem like it is such a chore? Just to clear the bad taste in my mouth out I went and looking for some more natural MFT videos and found this one:

What a nice horse, what a nice ride. Kudos to Far West Fox Trotters for riding in such a relaxed manner. Why can’t the pros figure out that THIS is what it’s all about. Not that jerking, spurring, hunched over and making the horse Missourable.

This year’s MFT Celebration is going on now, if you get interesting video let me know and I’ll do a follow up blog. Missouri Misery loves company!
Posted by ShameintheHorseShowRing at 1:14 AM 16 comments:

It's still going on and it is horrific. When is the state of Tennessee going to get off of their ass and do something about this level of abuse?

Rather than posting another rant I'm providing a link to a TWH blog that covers all the aspects of the breed. Read it and weep, it shows we have not evolved to the point that we should have.

For the Tennessee Walking Horse

And tell him to get his sorry ass in gear and put a stop to this kind of stuff in his state!
Posted by ShameintheHorseShowRing at 1:58 AM 3 comments: