I'll be nice and post a warning right now for those of you sensitive readers that don't like to read cuss words: Put your sunglasses on now, the venom will be at toxic levels!

This site was sent to me by a reader and I have to say that other than watching the youtube videos of Abu Gharaib I have never seen such a bunch of inhuman torture inflicted on another living being.

This horrible site is called "Freak of the Week". It is part of the Tennessee Walking Horse forum, which you can't get on unless you're thoroughly vetted and can prove you condone horse torture and won't spout off about anything sensible like good riding practices or taking care of your horse.

Freak of the Week
( you'll need windows media player to view most of these videos.

WARNING!!!!!!
Watching these videos will make you puke your fucking guts out. The first thing you'll note is that the horses are mostly young, mostly ridden by big hairy neaderthals and in pain every second of every video. The bits are huge and severe, there are more blinker hoods than you'll find at the Santa Anita meet, and the riding is appalling.
Who the fuck are these people? Why as a society haven't we evolved past this point of blatant vanity based abuse? Seriously, we have congressman worried about gay marriage and they don't give a shit about these poor horses being tortured?

Scroll through the list of horses and look at A Vision of Jose. How the fuck can anyone justify riding a horse in that manner? The hind legs look like they are about to disconnect and fall off!
This is a two year old for fucks sake! At two years old most horses are still growing and thinking about frolicking around the pasture. They aren't bitted up like some sex fetishist and being ridden by some huge bent backed cave dweller!

Scroll down some more and look at I'm Just a Ritz. Yes, that is a wonder gag in that poor colt's mouth. Yes, he looks sore and yes is rider is a bobbleheaded asshole. Most of the videos look like they are taking place at a sale review, but there are a few shot at home. I swear, watching some of them almost made me throw up. I cannot believe that every one of these assholes isn't in jail for abuse. The state of Tennessee has a lot to answer for by allowing, and promoting, this type of crap. I think the US government should put a stop to all funding to Tennessee until they ban the big lick shit permanently!

Once you're done washing out your mouth from puking over the last video scroll down to this the horse called Electrifying Hearbeat. He's about a 1/3 of the way down the page. A Dr. Dale Cannon just bought him and I hope every single one of this guy's patients quit going to him and write him up to the AMA for condoning horse abuse. Watch the video and prepare to be sickened. This colt is unhappy and you can tell that every second of his short life has been miserable. WTF is up with the blinker hoods again? Isn't it bad enough that you keep these horse stalled unless you're torturing them, but then when they are out you restrict their vision? How on earth can anyone justify riding a two year old in that kind of bit? You can see where he falls apart in the video several times and the camera person conveniently quits filming. It's just sickening. Dr. Cannon you should be ashamed of yourself. You are a disgrace to the Hippocratic Oath for buying this colt and giving profit to the people that abuse and degrade horses in this manner.

There are hundreds of videos on this site, each worse than the last. This one site composites everything that is terrible about the walking horse industry. It showcases the abuse, apathy and ignorance that keeps the Big Lick method of showing alive. I recommend that readers take note of the names of the trainers and farms. They aren't an integral part of the horse industry, instead they are all that is bad about it.

I'm sickened by this site, truly sickened. I'm ashamed that the horse industry as a whole has ignored and swept under the rug the abuse in the Big Lick Show Ring. Those of you in the stock breeds, as well as the English disciplines are guilty of agreement by your silence. You refuse to make a concentrated effort to speak out about this abuse because you fear that the abuses in your own industries will be examined more closely. Grow some fucking balls and get together and put a stop to this crap. All of the Natural Horsemanship gurus, Pat Parelli, John Lyons, Monty Roberts, Clinton Anderson and others should all be taking a break from shilling their mystic sticks and dvds and get their asses before congress and tell them to STOP this fucking abuse. A little celebrity goes a long way towards getting a cause recognized. Paris Hilton and the rest of the "I'll show my hoo-hoo if I want too" group need to get off their collective useless asses and put some of their money into stopping this shit!

Let's get this shit banned, there is no excuse for it!
Posted by ShameintheHorseShowRing at 7:12 PM 71 comments:

No wonder horses burn out!: Updated 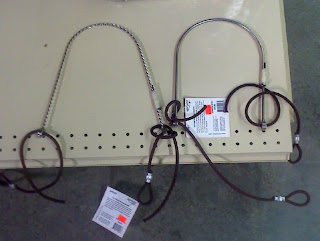 This photo was sent to me by a reader. It's an item she found at a rather prominent tack store in north Texas.

Before I say what it is I'd like to see some guess as to what the blog readers think these two devices are and what purposes they serve. They are training devices and not allowed in the show ring, but they are definitely used to create competition horses.

Update:
The readers are on the ball! These are indeed gag bit headstalls The metal crown pieces are thin and in the case of the one to the left it is a twisted wire. Hanging above these little gems were the various gag bits you could use with them, most of them twisted wire, all of them public indicators of how sorry-assed a lot of trainers are. My niece said the gadgets were hanging on a wall of "bits for people that have no clue how to train horses", which the store proprietor was not happy to hear. These two items can be purchased at Dennards in Aubrey, Tx, which is pretty much the horse capitol of Texas. Glad to know that the BNTs there have access to such crappy equipment and can use it on client horses. I wonder if Cleve, Scott or Becky shop there?
Posted by ShameintheHorseShowRing at 10:09 PM 22 comments: